The  Daily News reported yesterday that NYSUT, the New York teacher union, has bought about a dozen billboards upstate, as well as ads on bus shelters, urging parents to opt their children out of annual state standardized testing.  This is in spite of the fact that student results are no longer tied to teacher evaluations, the tests are shorter and untimed, and the State  is revising the Common Core learning standards.

Opt-out fever tends to afflict white and upper class suburban communities. In 2016 the statewide opt-out rate was about 21%, flat from the year before, but in some Long Island wealthy districts rates were far higher, sometimes topping 50%. In New York City, where the majority of public school students are poor and of color, the opt-out rate was about 2%. A report issued last August from the Teachers College of Columbia reported that,

The typical opt out activist is a highly educated, white, married, politically liberal parent whose children attend public school and whose household median income is well above the national average. The movement brings together Democrats (46.1 percent), Republicans (15.1 percent), Independents (33.3 percent), and supporters of other parties (5.5 percent).

In response to union leaders’ campaign against accountability, aided ably by the Long Island-based group New York State Allies for Education (NYSAE: see billboard above),  StudentsFirstNY just sent out a counter-message to parents urging them to allow their children to participate in testing.  Here’s the email: 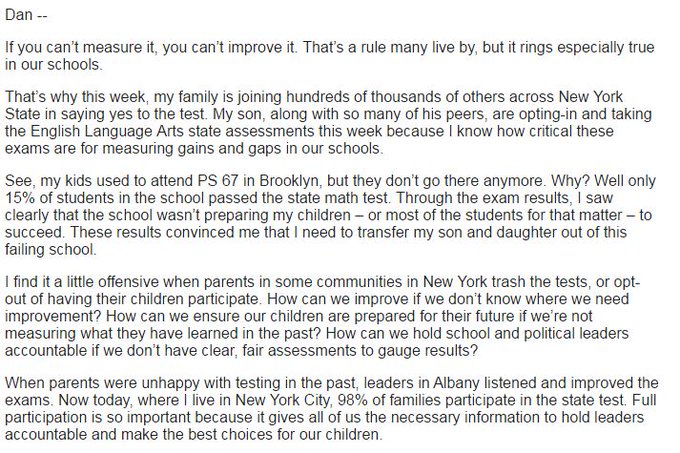